Our history, mission and people...

The Bahamas branch of the International Red Cross began its work in 1939 under the auspices of the British Red Cross. The original purpose was to serve the relief needs of Allied troops in the vicinity and particularly those stationed in The Bahamas. In 1945, as World War II ended, priorities shifted from treating wounded soldiers and sailors to treating and controlling disease and malnutrition. The Red Cross fell naturally into service in these areas and established a number of services to aid and care for children, the Center for Deaf Children among them.

It was during this period that the Branch began to attract and actively enlist the voluntary services of public-spirited philanthropic citizens and residents. Early supporters of the organization’s work included Dr. Jackson Burnside and Dr. Cleveland Eneas, both of whom supplied dental services to the Schools Medical Service, which the Red Cross provided. Other medical services were provided by Dr. G. Worrell and Dr. C. Gordon.

Over the years, The Bahamas Branch has benefited from the services and generous support of the public-spirited people many of whom distinguished themselves in other areas of public life. Between 1939 and 1968, Field Officers from the British Red Cross Society directed the affairs of the Branch and it was customary for the wife of the serving Governors to be appointed President. In 1969, however, an Acting Director was appointed and in 1970, the Branch Committee recruited and appointed its own Director for the first time. But, in the final analysis, it has been the commitment of the army of volunteers who have served the organization for over 50 years who have made it possible for the Red Cross to rise to the occasion when The Bahamas needed help.

In 1953, recognizing the value of the Nursing Service, which the Red Cross was providing, the Government adopted the Nursing Service and promptly expanded the training and welfare activities appointing both full time Welfare and Voluntary Training Officers for those purposes.

At this time, the Red Cross then turned its attention to train for disaster and emergency preparedness and providing food, clothing and other assistance to the needy.

In May of 1972, Bahamian President, Mrs. Rowena Eldon and Director, Mrs. Lottie V. Tynes were appointed and the first draft of the Constitution was completed. A full time Director of Training was also appointed.

On June 23, 1975, an Act to establish and incorporate The Bahamas Red Cross Society was passed in The Bahamas House of Parliament, when the Branch became a National Society. Application was then made to the I.C.R.C. in March 1976 for formal recognition. After the visit of several Delegates from Geneva, the Society was formally recognized on December 16, 1976 and became the 123rd Member of the International Red Cross.

On May 4, 1977, The Bahamas Red Cross Society was admitted to membership in the League of Red Cross and Red Crescent.

While blessed with a near perfect climate, and a history relatively free of serious natural disaster, The Bahamian people have had ample reason to be grateful to the Red Cross. The Society offers a wide range of assistance to members of the community who suffer loss as a result of fire, hurricane or any other type of disasters and works as an Auxiliary to The Bahamas Government.

The Annual Budget is financed through extensive fundraising, membership drive, donations and an Annual Government Grant.

The Red Cross relies on donations from the public to continue it's invaluable work.

Make a donation today to help us help others.

We need your help!

Volunteer to assist us with events or aid and relief distribution - every hour of your time counts. 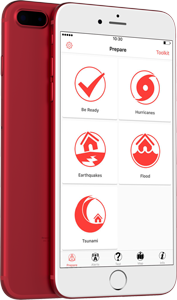 Stay safe with instant alerts on floods, hurricanes and other hazards with the Bahamas Red Cross Hazards app for iPhone and Android. 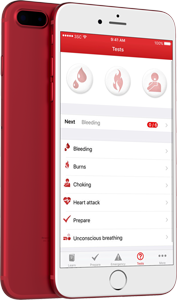 Bahamas Red Cross First Aid app for iPhone and Android provides life-saving First Aid info when you need it, where you need it.